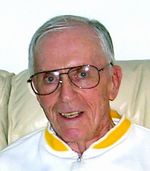 Warren 'Dyke' Orr, 83, of Charleroi, passed peacefully after a lengthy illness on Monday, April 27, 2009, surrounded by his family. He was born June 3, 1925, in California, Pa., a son of the late Isaiah and Sarah (Armstrong) Orr. He was a member of the Presbyterian Church of California and F&AM Masonic Lodge No. 615 of Charleroi for over 50 years. Dyke served his country with the U.S. Navy from 1943 to 1947 in both the Atlantic and Pacific theaters. He was a Pennsylvania State Police officer stationed in Butler. Dyke was an automobile dealer in the Mon Valley for over 40 years and a member of the Ford Dealers Development program, as well as a member of the Charleroi Elks, VFW and American Legion. He was an avid golfer, having six "holes in one" during his golfing years. He belonged to Mon Valley Country Club for 30 years, where he served as treasurer for many years. Over the years he maintained membership in the Nemacolin Country Club, Torrey Pines Country Club in La Jolla, Calif., and Saddlebrooke Country Club in Tucson, Ariz. His volunteer work encompassed the Aerospace and Antique Car Museum at Balboa Park in San Diego, Calif., and Aerospace at Davis Monthon Air Force Base in Tucson. Survivors include his wife of 29 years, Camelia (Hans) Orr; three daughters: Kathryn Calhoun, Nancy Acton and Bettie Grace Orr, all of Seattle, Wash.; a son, Deane Orr, of Fredericktown; and seven granddaughters, three great-granddaughters, and one great-grandson. In addition to his parents, he was preceded in death by a brother, Alvin Dale Orr; and sister; Mildred Avis Andrews. There will be no public visitation, and interment will be private. Sympathy donations may be made to the Michael J. Fox Parkinson's Research Foundation.