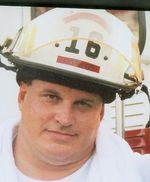 Sean T. Whiten, 47, of Stockdale, died Saturday, August 9, 2008 while instructing exercises at the Smithton Fire Training Center in Westmoreland County. He was born March 7, 1961 in North Charleroi, a son of Robert and Sylvia Humphries Whiten, who survive and reside in Charleroi. Sean was a member of Gospel Alliance Church, the Mon Valley and Rostraver Emergency Medical ambulance services, the Washington County HazMat team, and he was a past member of the Charleroi and Stockdale volunteer fire departments. He was a member and past president of the Roscoe Volunteer Fire Company and the Southwestern Fire Chiefs Association. Sean was a State Fire Academy suppression instructor at the local level, a position he held at the time of his death. He was a 1979 graduate of Charleroi Area High School and 1984 graduate of Indiana State University at Terre Haute, Ind., where he was very active in athletics. Sean was employed by Simonds International, out of Fitchburg, Mass., as a regional manager, PSC serving the entire East Coast. In addition to his parents, he is survived by his wife of 23 years, Linda Rebar Whiten, and son, Sean Robert Whiten, of Stockdale; one brother, Robert Whiten and wife Jan, of Charleroi; his mother-in-law, Gladys Rebar, of Stockdale; one brother-in- law, John Rebar, of Charleroi; nephew, Ian Whiten; nieces, Brandee and Brittany Rebar and Brooke Ramsdell; and one great-niece and nephew, Taylor and Aidan Ramsdell. He was preceded in death by his maternal grandparents, Catherine and George Humphries. Friends will be received in the ED MELENYZER FUNERAL HOMES INC., Roscoe, on Tuesday from 6 to 8 p.m. and Wednesday from 2 to 4 and 6 to 8 p.m. A Fireman's Memorial Service will be held in the funeral home Wednesday at 7 p.m. Additional viewing will be held Thursday, August 14 from 9 to 11 a.m., the hour of service at the Stockdale Fire Department. Private burial will be held at the convenience of the family. Memorial donations may be made to: Sean Whiten Memorial Fund, c/o of the Roscoe Volunteer Fire Company.