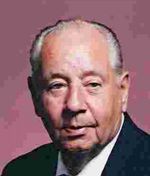 Ross C. Huhn, 86, of Stockdale, died peacefully on Sunday, February 3, 2008, after a lengthy illness. He was born January 26, 1922, in Elco, a son of the late Kurt and Hilda Binkney Huhn Harper. He retired from Wheeling-Pittsburgh Steel, Allenport plant after many years in the millwright department. Mr. Huhn was a Pearl Harbor survivor, serving with the U.S. Army from 1941 to 1945 with Battery B, 63rd Field Artillery Battalion, stationed in Hawaii. He received six Bronze Stars and other medals. He was a member of Roscoe American Legion Post 801. Survivors include three children, Janice (Robert) Lindsay, of Grand Ledge, Mich., Carol Robinson, of Stockdale, and Eric Huhn, of King of Prussia; three grandchildren, Stacy (Ken) Barry, Trisha (Michael) Boughton and Kari (Robert) Mazzaferro; and three great-grandchildren, Aaron Boughton, Alekzander Mazzaferro and Tanner Barry. In addition to his parents, he was preceded in death by his wife, Alfhild "Kay" Huhn, on August 6, 2007; and two sisters, Gloria Krivacek and Wilma Ross. The family will receive friends from 2 to 4 and 6 to 8 p.m. Wednesday in the ED MELENYZER FUNERAL HOMES INC., Roscoe. The funeral home doors will be open from 9 a.m. to 8 p.m. Wednesday. American Legion services will be held Wednesday at 7:30 p.m. in the funeral home. A funeral service will be held Thursday, Feb. 7, at 10:30 a.m. in the funeral home with Pastor Randy Landerman of Grace United Methodist Church officiating. Interment will follow in Mon Valley Memorial Park, Donora.