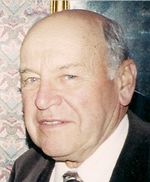 Robert Simpson, 87, of Roscoe, passed away peacefully on Wednesday, July 14, 2010 in Arden Courts of Jefferson Hills. A son of the late Mark and Lida Donaldson Simpson, he was born May 29, 1923 in Roscoe. Mr. Simpson was a member of the United Methodist Church and American Legion Post #801, both in Roscoe, and the F&AM Lodge #615 in Charleroi. He is survived by a son, Doug, of Allenport and a daughter and son-in-law, Roberta and David Delasko of Windber. In addition to his parents, he is preceded in death by his wife, Dorothy, in September 1991. Friends will be received at Melenyzer-DuBarr Funeral Homes & Cremation Services, Inc, 1008 Furlong Avenue, Roscoe, on Saturday, from 2 to 4 and 6 to 8 p.m. A funeral service will be held in the funeral home on Sunday, July 18, at 1 p.m. with Pastor Brian Carroll of the Roscoe United Methodist Church presiding. Interment will follow in Howe Cemetery, Coal Center.