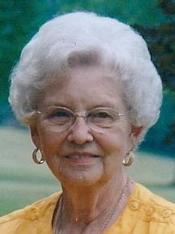 Private funeral services were held on Monday, February 6, 2012, for Nellie A. Palmer, 83, of Fallowfield Township, who passed away on Friday, February 3, 2012. A daughter of the late William J. Armbruster, Sr. and Elsie Mancha Armbruster of Fallowfield Township, Nellie was a resident of Fallowfield Township her entire life. She was a 1946 graduate of Charleroi High School and worked at the Mellon Bank in Charleroi. She was married to Thomas M. Palmer, also a Fallowfield Township native, for sixty years. For many years, the couple operated the Thomas Palmer Driver Training School. She is survived by her husband, Thomas Masten Palmer; a daughter, Dr. Cheryl Ann Palmer of Birmingham, Alabama; a son, Kent Thomas Palmer of Fort Worth, Texas; and two grandsons, Masten Kent Palmer of Fort Worth and Michael Isaac Palmer of Birmingham. In addition to her parents, Mrs. Palmer was preceded in death by a sister, Shirley Harshman; and a brother, William James Armbruster, Jr. Funeral arrangements were entrusted to the Melenyzer-DuBarr Funeral Homes & Cremation Services, Inc., 825 Fallowfield Avenue, Charleroi. Mrs. Palmer was interred in Maple Creek Cemetery. The family requests memorial donations be made to the Pancreatic Cancer Action Network, 1500 Rosecrans Avenue, Suite 200, Manhattan Beach, California, 90266 or at www.pancan.org.