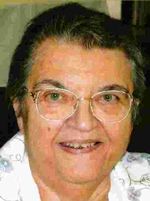 Millie J. Kostich Strelecki, 76, of Allenport, died peacefully on Thursday, February 14, 2008, in the Adult Assisted Living in Dunlevy. She was born June 7, 1931, in Stockdale, a daughter of the late Milija "Mike" Komanko and Danica "Ann" Senovich Kostich. She was a member of St. Joseph's Roman Catholic Church in Roscoe and the Ladies Guild. On July 16, 1949, Millie married the late Joseph T. Strelecki in St. Joseph's Church. She was a homemaker, wife, mother, grandmother and great-grandmother. Millie was well known for her wonderful cooking and baking skills. Her gifts of homemade cookies, cakes and candies were highly prized. She loved bingo and her soaps. Survivors include three children and spouses, Mary and Nick Puskarich, of Houston, Joseph and Bernadette Strelecki, of North Charleroi, and Anthony "Neno" and Roberta "Bertie" Strelecki, of Allenport; five grandchildren, Michele (Kevin) Hartle, Deborah (Steven) Stano, Dawn (Jeff) Nartic, Steven Strelecki, Alexandra Puskarich; six great-grandchildren, Victoria and Kayleigh Horecky, Joseph and Anna Hartle, and Benjamin and Daniel Nartic; one brother, Milan "Ted" Kostich and wife, Joan, of North Irwin; one brother-in-law, Tom Rice; aunts, Alice Ferment, of Fair Oaks, and Helen Senovich, of Imperial; and many nieces, nephews and cousins. In addition to her parents, she was preceded in death by her husband, Joseph Strelecki; and one sister, Helen Rice. Friends will be received Saturday, February 16, from 6 to 8 p.m., and Sunday, February 17, from 2 to 4 and 6 to 8 p.m. in the ED MELENYZER FUNERAL HOMES INC., Roscoe 724-938-9323). A Blessing Service will be held Monday, February 18, at 9:15 a.m. in the funeral home, followed by A Mass of Christian Burial at 9:30 a.m. in St. Joseph R.C. Church. Interment will be in Sacred Heart Cemetery, Monongahela.