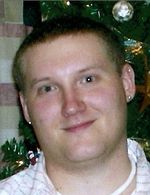 After a courageous two-year battle with cancer, Michael W. Dranzo, 28, of Roscoe, passed away peacefully with his family by his side on Friday, March 5, 2010, at his residence. Born January 31, 1982, in Monongahela, he is the son of Carl and Rosemary (Ray) Dranzo Jr. of Roscoe. After graduating from California High School, he attended Douglas School of Business, receiving a degree in Computer Graphics. He then went on to work as a laborer for National Polymers, Inc. Mike was a member of Roscoe United Methodist Church and was an avid Pittsburgh Steelers and Penguins fan. He also enjoyed watching WWE wrestling and collecting movie DVD's. In addition to his parents, he is survived by a brother, Brian Dranzo and wife Jennifer of Yorktown, VA; a sister, Kathleen Boda and husband Kenneth of Roscoe; nieces, Madeline and Makayla Boda, and Miranda Dranzo; a nephew, Evan Dranzo; a grandmother, Kathryn Dranzo; aunts, Agnes Jean Jenkins and Elizabeth Ray; an uncle, William Ray; all of his loving cousins that he cherished so dearly; his fiancAC., Alysia Klingovsky; his best friend since kindergarten, Jim Gosney; and his dog, Chico. Mike was preceded in death by his grandfather, Carl Dranzo, Sr.; a grandmother, Mary Ray; an aunt, Barbara Tunney; and an uncle, Fred Ray. Family and friends will be received Saturday, from 7 to 9 p.m., and Sunday, from 2 to 4 and 6 to 8 p.m., in the Melenyzer-DuBarr Funeral Homes & Cremation Services, Inc., 1008 Furlong Ave., Roscoe, where funeral services will be held Monday, March 8, at 11 a.m., with Pastor Brian Carroll presiding. Interment will follow in Mt. Tabor Cemetery. The funeral home will be open Sunday from 9 a.m. to 8 p.m.