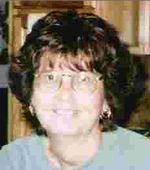 Madeline "Midge" Muzina Zdravecky, 58, of Roscoe, went to be with the Lord Tuesday, Jan. 29, 2008, after a year-long illness. She was born Aug. 1, 1949, in North Charleroi, a daughter of the late Charles and Madeline Guffrey Muzina. She was a member of St. Joseph Roman Catholic Church of Roscoe and a 1967 graduate of California High School. She was a former employee of Toy City and IPSCO of Roscoe and of Wal Mart in Belle Vernon. Midge was an avid bingo player and enjoyed spending time and buying gifts for her husband and grandchildren. She also enjoyed her computer and her e-mail friends. Survivors include her husband, Ralph; three children, Marty Shemansky and his wife, Sharon, Jody Lynn Shemansky and Maria Wadsworth and her husband, John, all of Roscoe; three grandchildren, MiKayla Madeline Shemansky, Maddilynn Marie Caldwell and Miranda Nicole Wadsworth; a fourth grandchild expected in February; sister and brother-in-law, Kathy and Butch Gray, of North Charleroi; her mother-in-law, Gertrude Zdravecky, of Monessen; and many aunts, uncles, nephews, nieces, cousins and friends. In addition to her parents, she was preceded in death by two sisters, Maria Muzina Zahand and Charlene Muzina Hartley; and aunts and uncles. Friends will be received from 2 to 4 and 6 to 8 p.m. Friday in the ED MELENYZER FUNERAL HOMES INC., Roscoe, where a funeral service will be held at 10:30 a.m. Saturday with Father George Moneck of St. Joseph's Roman Catholic Church officiating. Interment in Mt. Calvary Cemetery, Coal Center.