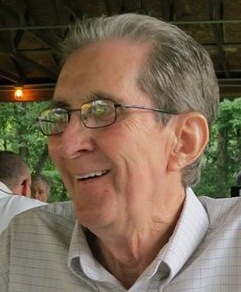 Glenn D. Cairns 85 of Rosoce, died Wednesday June 5, 2019 at his home. Born in Roscoe on January 9, 1934, a son of Glenn and Mary Rovny Cairns Sr.. Glenn was a member and Eucharistic minister at the former St. Joseph's Church Roscoe, a former Roscoe Borough Councilman for over 30yrs, and a member of the American Legion Post# 801 Roscoe. He was retired from the former Wheeling-Pittsburgh Steel Allenport plant and was a Korean War veteran having served the United States Air Force.

Glenn is survived by his wife Patricia Krivacek Cairns, 3 daughters and sons-in-law; Colleen and Charles Rotheram of Allenport, Kelly and Wade Riess of Roscoe, and Cristin and David Geletei of Roscoe, 5 grandchildren; CJ and Cassie Rotheram, Matthew Riess, and John and Nathan Geletei, and a sister Andrea Skrobacs of Williamsport. He is preceded in death by his sister Mary Anne Ermlick.

A Mass of Christian Burial was celebrated on Saturday June 8, 2019 at The Historic St. Peter's Church, Brownsville with Rev. Timothy Kruthaupt officiating. Interment at the National Cemeteries of the Alleghenies with military honors by the United States Air Force Honors.

Glenn's family would like to thank the caretakers of In Home Instead and Amedisys Hospice.