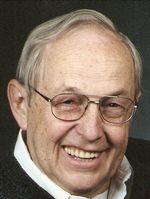 George B. Wiles Jr., 78, of Carroll Township, passed away at his residence on Wednesday, August 19, 2009. A son of the late George B. and Roberta (Brown) Wiles, he was born June 20, 1931, in Monessen. He was a U.S. Navy veteran, serving on the USS Yarnall during the Korean War. George drove bus for Greyhound Bus Lines, 88 Transit Lines and GG&C Bus Co. for many years before becoming a salesman for Roley Pontiac in Belle Vernon. He was a member of Holy Trinity Orthodox Church and F&AM Lodge 615, both in Charleroi. While an active member of the Charleroi Lodge, he played a vital role in the planning and construction of the current lodge building. He is survived by very special friends, David and Joanne Metz of Carroll Township; and several nieces, nephews and cousins. In addition to his parents, George was preceded in death by his wife Martha, in April 2006. Friends will be received Friday from 2 to 4 and 6 to 8 p.m. in the Melenyzer-DuBarr Funeral Homes & Cremation Services, Inc., Charleroi (724-483-2231), where Tri-County F&AM Lodge 643 will conduct a Masonic service at 7 p.m. A funeral service will be held at 10 a.m., Saturday, August 22, in the funeral home. Interment will follow in Mon Valley Memorial Park, Donora.

To order memorial trees in memory of George B. Wiles, please visit our tree store.