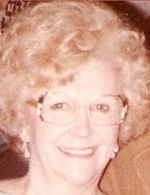 Audrey Mankin, 90, of Roscoe, passed peacefully on Friday, March 27, 2009. She was born July 15, 1918, in Elco, a daughter of the late John Allison and Minnie Mae (McGowan) Wright. Audrey was a member of the Roscoe Presbyterian Church and the Order of Eastern Star, where she served as Worthy Matron from 1969-1970. She was a 1936 graduate of Charleroi High School and a member of the Roscoe American Legion Auxiliary, Post No. 801. She was happily married to Werton Mankin from 1938 until his death on Oct. 30, 2000. Audrey is survived by three daughters, Bonnie Dale Bogacsi, of Stockdale, Sharon Gale Arnold (David), of Waynesburg, and Marilyn Gallagher (Michael), of Fredericktown; seven grandchildren, and 11great-grandchildren. In addition to her parents and husband, she was preceded in death by two brothers, Kenneth and Johnny Wright. Friends will be received from 2 to 4 and 6 to 8 p.m. Monday in the MELENYZER-DuBARR FUNERAL HOMES and CREMATION SERVICES INC., Roscoe, where a funeral service will be held at 11 a.m. Tuesday, March 31. Interment will follow in Howe Cemetery, Coal Center.