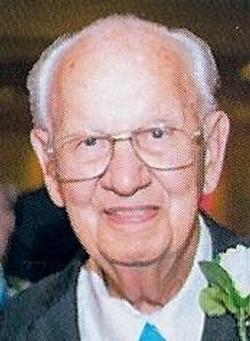 Andrew D. Kalnicky, 91, of Fallowfield Township, passed away unexpectedly at his residence Monday, Jan. 20, 2014. Born Nov. 24, 1922, in Charleroi, he was the son of the late Andrew and Julia (Polomka) Kalnicky. Mr. Kalnicky served in the European Theater during World War II with the 71st Division of the Army. He was a member of Grace United Methodist Church in Coal Center, the Veterans Club of Charleroi and Senior Bowling League at Tan-O-Bell Lanes in Bentleyville. Mr. Kalnicky was retired from Conrail where he worked for over 41 years as a clerk. Left to cherish his loving memory are his son, Ronald D. Kalnicky and daughter-in-law, Nancy; daughter, Andrea Ann Russo and husband, Gene; grandchildren, Jennifer DiPietrantonio and husband, Theron, Jason Kalnicky and wife, Carla, Justin Kalnicky and wife, Jennifer, and Justin Russo and wife, Lesley; great-granddaughters, Lairah and Rya DiPietrantonio and Giuliana and Giannina Russo; and numerous nieces and nephews. In addition to his parents, he was preceded in death by his wife, Estelle, on Aug. 24, 2008; and sisters, Julia Tuman, Anna K. Jobes and Helen Ruth Hanas. Family and friends will be received 3 to 8 p.m. Thursday in the LEONARD M. PAVLIC FUNERAL HOME, 235 Fallowfield Ave., Charleroi, and from 10 to 11 a.m., the hour of service, Friday, Jan. 24, at the Grace United Methodist Church with Pastor Ken Custer officiating. Interment will follow in Monongahela Cemetery. Arrangements are being handled by Melenyzer-DuBarr Funeral Homes and Cremations Inc.